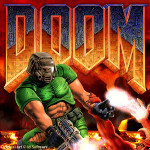 Being a first-person shooter, Doom is experienced through the eyes of the main character. This character is not named throughout the game. The game's designer, John Romero, has pointed out that this is so the player feels more involved in the game: "There was never a name for the DOOM marine because it's supposed to be you." At its core, the gameplay is similar to classic shooter games, presenting the player with the challenge of surviving while shooting every enemy in sight, but with its pseudo-3D first-person perspective giving environments a spatial representation that has a major effect on the level design and gameplay experience. In order for the game to be completed, the marine must fight through Phobos, Deimos, and then Hell itself, each presented as an episode containing eight distinct levels, along with an optional ninth hidden level for each one. The Ultimate Doom, the retail store version of the game, adds a fourth episode, Thy Flesh Consumed. Set between the end of Doom and before Doom II and featuring the first contribution of Tim Willits to the Doom franchise, the fourth episode was designed for expert Doom players seeking a major challenge (being considerably more difficult than the original episodes). The objective of each level is simply to locate the exit room that leads to the next area, marked with an exit sign and/or a special kind of door, while surviving all hazards on the way. Among the obstacles are demonic monsters, pits of toxic or radioactive slime, ceilings that lower and crush anything below them, and locked doors which require a keycard, skull-shaped key device, or a remote switch to be located. The levels are sometimes labyrinthine and feature plenty of items such as additional ammo, health increases and other "power-ups" along the way, as well as the occasional secret areas which are not immediately obvious as a reward for players who explore more carefully. To ease navigation through the levels, a full screen automap is available and shows the areas explored to that point. Many versions of Doom (and its sequels) include secret levels which are accessed by the player discovering alternate exits, often hidden behind secret doors, hidden passageways, or in areas which are difficult to reach. Despite carrying masses of high-tech weaponry, the main character can still run at blistering speeds. Doom is notable for the weapons arsenal available to the marine, which became prototypical for first-person shooters. The player character starts armed only with a pistol, and fists in case the ammunition runs out, but larger weapons can be picked up: these are a chainsaw, a shotgun, a chaingun, a rocket launcher, a plasma rifle, and finally the immensely powerful BFG 9000. There is a wide array of power-ups, such as a backpack that increases the player character's ammunition-carrying capacity, armor, first aid kits to restore health, the berserk pack which both restores health and causes the player's punching attack to deal enormous damage, supernatural blue orbs (named soul spheres in the manuals) that boost the player character's health up to a maximum of 200%, nightvision, computer maps (which show every area of the level), partial invisibility, and protective suits that allow the player to survive in toxic acids. Play Doom online. Sneslive is the best place to play Super Nintendo games online. Enjoy our SNES games flash emulator and have fun! More info: Wikipedia