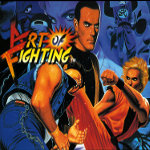 Art of Fighting ("Fist of Dragon and Tiger") is a video game trilogy in the genre of competitive fighting game titles that were released for the Neo Geo platform in the early 1990s and then for the Super Nintendo platform. The Art of Fighting series follows the conventions of the time in the sense that the player faces a variety of opponents in best two-out-of-three matches. Each of the game's characters have a unique fighting style and set of special techniques. The player has two basic attacks—punch and kick—as well as a utility button that switches between punches, kicks, and throws. A fourth button is used for taunting. Art of Fighting's contribution to the genre was the inclusion of a "spirit gauge" underneath the character's life bar. When characters perform special techniques, their spirit gauge is depleted and their special attacks become weaker. Players can also drain their opponent's spirit gauge by taunting them. Have fun playing Art of Fighting online! More info: Wikipedia