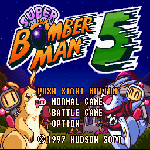 Super Bomberman 5, released by Hudson Soft in early 1997, was the final Bomberman game released on the Super Family Computer. The game was released in two variations: a standard cartridge and a gold cartridge, which was sold exclusively through CoroCoro Comic. The gold cartridge included extra maps in battle mode. An evil Bomber named Emperor Terrorin who has the power of Time itself has freed various criminal Bombers from their prison cells in orbit around Planet Bomber. Setting them up in a warped time and space, Shirobon, Kurobon, and their Louie (Rui) companions must travel through stages and defeat them before going up against Emperor Terrorin himself. More info: Wikipedia