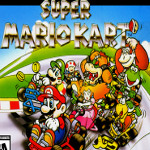 Super Mario Kart is a kart racing game featuring several single and multiplayer modes. During the game, players take control of one of eight Mario franchise characters and drive karts around tracks with a Mario franchise theme. In order for them to begin driving, Lakitu will appear with a traffic light hanging on his fishing pole, which starts the countdown. When the light turns green, the race or battle officially begins. During a race, the player's viewpoint is from behind his or her kart. The goal of the game is to either finish a race ahead of other racers, who are controlled by the computer and other players, or complete a circuit in the fastest time. There is also a battle mode in which the aim is to attack the karts of the other human players. Tiles marked with question marks are arrayed on the race tracks; they give special abilities (power-ups) to a player's kart if the vehicle passes over them. Power-ups, such as the ability to throw shells and bananas, allow racers to hit others with the objects, causing them to spin and lose control. A kart that obtains the star power-up is temporarily invulnerable to attack. Computer players have specific special powers associated with each character, that they are able to use throughout the race. Lines of coins are found on the tracks in competitive race modes. By running over these coins, a kart collects them and increases its top speed. Having coins also helps players when their kart is hit by another: instead of spinning and losing control, they lose a coin. Coins are also lost when karts are struck by power-ups or fall off the tracks. Super Mario Kart rock! The game features advanced maneuvers such as power sliding and hopping. Power sliding allows a kart to maintain its speed while turning, although executing the maneuver for too long causes the kart to spin. Hopping helps a kart execute tighter turns: the kart makes a short hop and turns in the air, speeding off in the new direction when it lands. Reviewers praised Super Mario Kart's gameplay, describing the battle mode as "addictive" and the single player gameplay as "incredible". IGN stated that the gameplay mechanics defined the genre. Play Super Mario Kart online. Sneslive is the best place to play Super Nintendo games online. Enjoy our SNES games flash emulator and have fun! More info: Wikipedia