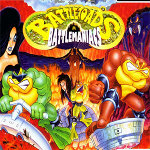 Battletoads in Battlemaniacs is an action-platform beat 'em up game that takes place inside the Gamescape, a fictional, virtual world where computer-generated villains created by Silas Volkmire run amok. The player controls either Rash or Pimple, depending on which controller they have plugged in, and have longer health meters than in previous games. Unlike previous entries in the Battletoads series, however, each character has their own combo attacks and special moves. Pimple, for example, can use the "BT Big Hammer" special move at the end of a combo, wherein an exaggerated hammer protrudes from his fists, instantly killing his foes. Rash, on the other hand, can use the classic "Big Boot Block" move from the original Battletoads, where his foot transforms into a massive, spiky boot. The game is split up into six stages, each with their own special type of gameplay. For example, the first stage, "Khaos Mountains" is a side-scrolling beat 'em up, whereas the fifth stage, "Tracktors" is a racing level that takes place on rails. Though the stages feature unique twists on gameplay styles, all of the stages are actually enhanced versions of their counterparts from the first Battletoads. For instance, stage three, "Speeder Bikes" is very similar to the original game's third stage, which also featured the player racing on speedbikes and dodging obstacles in the same way. In addition, stage four, "Karnath's Revenge" also resembles the original game's sixth stage, wherein the player rides along massive, fast-moving snakes in order to get to the exit. Battletoads in Battlemaniacs also features a handful of bonus stages in which the player can earn extra lives. These stages appear after the second and fifth stages, respectively, and feature Rash or Pimple on a circular disc as the screen scrolls to the right, allowing the player to collect red and blue colored bowling pins and avoid the black ones. In addition, the game features a handful of boss fights, ranging from a massive stone pig named Rocky, who jumps high in the air and stomps the ground, to the Dark Queen herself, who teleports around her tower and shoots magic missiles at the player. Play Battletoads In Battlemaniacs online. Sneslive is the best place to play Super Nintendo games online. Enjoy our SNES games flash emulator and have fun! More info: Wikipedia