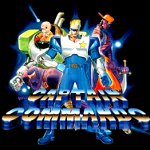 Captain Commando is a 1991 futuristic side-scrolling beat 'em up game originally developed and published by Capcom as a coin-operated video game, and later ported to several other platforms. It was the seventeenth title produced for the company's CP System hardware. The game stars the titular superhero who was originally conceived as a fictional spokesman used by Capcom USA in the company's console games during the late 1980s. Captain Commando follows the same gameplay established in Capcom's previous beat-'em-up Final Fight. The arcade version allows up to two, three, or even four players simultaneously depending on the game's settings. The player can select between any of the four "commandos" (Mack, Captain, Ginzu, or Baby-Head) as their character, with each player controlling a different character. The player's objective as usual is to move towards the end of each stage, defeat every adversary who gets in their way while avoiding any traps that they may throw at the player's way before eventually fighting the boss awaiting at the final area of each stage. The game consists of a total of nine stages. More info: Wikipedia