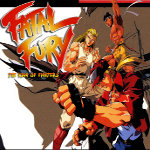 Fatal Fury – The King of Fighters is a great fighting game. The gameplay follows the typical formula of most fighting games: the player competes against their opponent in best two-out-of-three matches. The play controls consists of an eight directional joystick and three attack buttons: punch, kick and throw. Each of the playable character has special techniques that are performed by inputting specific commands and combination with the joystick and buttons. The input methods for special moves are shown to the player during the course of the game (after every bonus round), as opposed to being given in an instruction card in the game's cabinet. The most novel aspect of Fatal Fury were the addition of two-line battles. Many stages featured two rows, a background row and a foreground row. Players can change between rowsat enemy time other than the Single-Player mode, where in almost all fights, you have to wait for the CPU opponent to change rows before you can. You are not required however to do so. Have fun playing Fatal Fury – The King of Fighters online! More info: Wikipedia