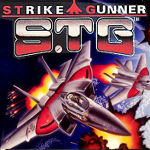 Strike Gunner S.T.G is a vertical scrolling shoot 'em up video game originally released on the arcades in 1991 by Tecmo, and then later ported for the Super Nintendo. The Super NES version is known in Europe as Super Strike Gunner and was published by Activision. The player takes control of a high-tech jet, the "Strike Gunner" of the title, and faces wave after wave of enemies, ranging from helicopters, jets, tanks and airships, among others. Have fun playing Strike Gunner online! More info: Wikipedia