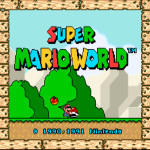 Super Mario World is a two-dimensional, side-scrolling platform game where the player controls the on-screen protagonist Mario. The game shares similar gameplay mechanics with earlier titles in the series—Super Mario Bros., Super Mario Bros. 2, and Super Mario Bros. 3 — but introduces several new elements. In addition to the running and jumping moves found in past games, the player can float with the aid of special items, and execute new types of jumps such as the spin jump. The game has a total of 96 levels. Super Mario World is great! The player navigates through the game via two game screens: an overworld map and a side-scrolling playfield. The overworld map displays an overhead representation of the current world and has several paths leading from the world's entrance to a castle. Paths connect to action panels, fortresses, ghost houses and other map icons, and allow players to take different routes to reach the world's goal. Moving the on-screen character to an action panel or fortress allows access to that level's playfield. The majority of the game takes place in these linear levels, populated with obstacles and enemies, with the player traversing the stage by running, jumping, and dodging or defeating enemies. The player is given a number of lives, which are lost when an enemy attacks Mario, falls into a pit of lava, or runs out of time. If all lives are lost at any point in the game, the "Game Over" screen will appear, in which the player can continue from the last level played by selecting "Continue". Each world features a final stage with a boss to defeat; each of the seven worlds features fortresses controlled by one of the Koopalings, and the player also battles Bowser in his castle in the seventh and final world. Super Mario World includes a multiplayer option which allows two players to play the game by alternating turns at navigating the overworld map and accessing stage levels; the first player controls Mario, while the second controls his brother Luigi. Although the main objective is to navigate through seven worlds to reach the end of the game, the player can beat the game much faster by using secret Star Road routes. To access hidden worlds, the player needs to find portals scattered throughout the game's levels. Portals are usually locked and require keys to open. Exploring these secret stages can lead to other stages, such as Special World. Completion of Special World permanently alters some sprites and the overworld map's colour scheme. Play Super Mario World online. Sneslive is the best place to play Super Nintendo games online. Enjoy our SNES games flash emulator and have fun! More info: Wikipedia