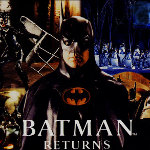 Batman Returns is a video game for various platforms based on the movie of the same name. The SNES version of the game was released in 1993. It is fundamentally a left-to-right scrolling fighter beat 'em up, a genre that was featured heavily on the console at the time. The gameplay and graphics are very similar to the Final Fight games. The game takes the player through seven scenes featured in the film. Various members of the Red Triangle Circus Gang attack Batman throughout the game. Batman has a number of weapons and moves at his disposal, including the batarang. Each level ends with a boss character, which requires a little more effort and strategy to defeat. A number of levels are two-dimensional platform levels as opposed to the majority of the pseudo-3D levels where freer movement is permitted. The fifth level consists of driving the Batmobile in a chase scene where Batman must chase bikers and a heavily armed van from the gang. In order to defeat them, the Batmobile uses a machine gun. Batman Returns is very cool! Reviews of the game were largely positive, although some criticism was made about the lack of originality. Praise was gained for the quality of the graphics, sound, fluid controls, balanced difficulty level and atmosphere (with music adapted by Jun Funahashi, Harumi Uekō and Kazuhiko Uehara from Danny Elfman's score for the film). Play Batman Returns online. Sneslive is the best place to play Super Nintendo games online. Enjoy our SNES games flash emulator and have fun! More info: Wikipedia