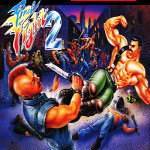 Final Fight 2 does not deviate much from the original Final Fight in terms of gameplay, although unlike the SNES version of the first game (and the alternate version Final Fight Guy), Final Fight 2 features a two-player cooperative mode in addition to the single-player mode. The player has a choice between three characters: Haggar, who uses professional wrestling techniques; Maki, a female master of the fictional ninjutsu school of Bushin-ryū Ninpō, similar to Guy from the first game; and Carlos, a South American martial artist of Japanese descent who uses a sword for his Special Move. Through use of a code, two players can select the same character. Like in the original game, each character has their own set of fighting techniques and abilities unique to each character. Final Fight 2 gameplay remains the same as in the original game. The player has two main action buttons (Attack and Jump), which when pressed together, makes the player's character perform their Special Move (a third button can also be assigned for this purpose). The player proceed through levels fighting against hordes of underlings before reaching a boss character at the end of each stage. Health-restoring food items and other bonus point items are hidden away in breakable drums and barrels. There are also three retrievable weapons in the game, a tonfa, a piece of lumber and a knife. There is also a "Genryusai Doll" which makes the player invulnerable for a limited period and a "Guy Doll" which gives the player an extra life. Play Final Fight 2 online. Sneslive is the best place to play Super Nintendo games online. Enjoy our SNES games flash emulator and have fun! More info: Wikipedia