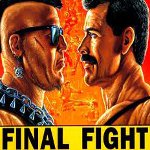 Final Fight is a side-scrolling beat-'em-up produced by Capcom. Originally released as an arcade game in 1989, it was the seventh title released for the CP System hardware. Set in the fictional Metro City, the player controls one of three characters—former pro wrestler and newly elected mayor Mike Haggar, his daughter's boyfriend Cody, and Cody's best friend Guy—as they set out to defeat the Mad Gear gang and rescue Haggar's young daughter Jessica. Final Fight can be played by up to two players simultaneously. Before the game begins, the player chooses between the three main characters: Haggar, Cody, and Guy. Each has his own fighting style and attributes. Health gauges are displayed for both player and enemy characters. The controls for Final Fight consist of an eight-way joystick and two buttons for attacking and jumping respectively. Pressing the attack button repeatedly when attacking an enemy or multiple enemies will cause the player character to perform a combo. The final blow of the combo can be changed to a throw if the player moves the joystick in the opposite direction just before landing it. The player can also perform a jump attack. Pressing the attack and jump buttons simultaneously allows the player to perform a special attack that strikes all surrounding enemies, but will drain a small portion of the player's health. More info: Wikipedia