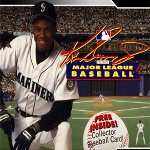 Ken Griffey Jr. Presents Major League Baseball was groundbreaking and had a long list of features for its time. Nearly every team has its own venue, sometimes complete with unique features, including Dodger Stadium's "slants" by the outfield crowd (the outfield "roof"), Shea Stadium's minuscule center field crowd, and the large scoreboard in the right field of Comiskey Park. Due to cartridge space limitations, some stadiums could not be added, and in those cases a generic stadium with green or blue walls is used. Some of the stadiums are particularly realistic; Fenway Park's trademark Green Monster is in the game, as is Joe Robbie Stadium's teal wall and Oriole Park at Camden Yards' trademark Warehouse in right field. The game featured statistics from the real-life 1993 season, and also kept statistics for the team controlled by the user throughout a season, though all of the statistics of CPU-controlled teams remained unchanged. Pitching is one of the simplest elements in this game. There is also a battery-backed season mode, where players can select a team to play for 26, 78, or all 162 games. Players who finish first in their division earn a playoff berth and a chance to be in the 1993 World Series. Unique to the game was the ability to choose playing a season using a system of either 4 or 6 divisions, as the game was released after the 6 division system was proposed, but before an actual season was played using six divisions. The team rosters are based on the 1993 Baseball season with stats included. The game also features the 5 new logos and uniforms designs of the Houston Astros, Milwaukee Brewers, San Francisco Giants, Texas Rangers, and the Detroit Tigers compared to what they looked like in 1993. The game also features the new ballparks Globe Life Park the home ballpark to the Texas Rangers, and Progressive Field the home ballpark to the Cleveland Indians. Play Ken Griffey Jr. Presents Major League Baseball online. Sneslive is the best place to play Super Nintendo games online. Enjoy our SNES games flash emulator and have fun! More info: Wikipedia