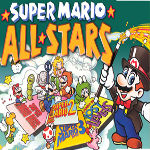 Super Mario All-Stars is a video game compilation that features complete remakes of the four Super Mario side-scrolling platform games that were originally released for the Nintendo Entertainment System and the Famicom Disk System between 1985 and 1990: Super Mario Bros., Super Mario Bros.: The Lost Levels (Super Mario Bros. 2 in Japan), Super Mario Bros. 2 (Super Mario USA in Japan), and Super Mario Bros. 3. The gameplay of each remade game is nearly identical to its original version, though some game physics as well as character and level designs are slightly modified, and some bugs, including the "Minus World" in Super Mario Bros., are fixed. The four games each feature enhanced 16-bit graphics and updated soundtracks to take advantage of the Super NES hardware, including parallax scrolling. All four games offer a save feature, which the original games lacked, allowing the player to save progress and resume play from the start of any previously accessed world (or in The Lost Levels, any previously accessed level). Up to four individual save files can be stored for each game. The games also allow the player to customize control configuration, allowing the "jump" and "dash" actions to be mapped to different buttons on the Super NES controller. More info: Wikipedia