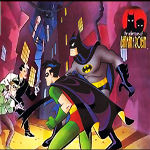 The Adventures of Batman & Robin is a 1994 and 1995 video game based on the popular DC Comics characters Batman and Robin and specifically the critically acclaimed animated cartoon Batman: The Animated Series (which had been renamed The Adventures of Batman and Robin for its second season at the time of the game's production). There are several releases of the video game for the different consoles in the market at the time including Super Nintendo. The SNES version is developed and published by Konami. Each level consists of an episode that is loosely based on those from the animated series, taking Batman to an amusement park and other places where supercriminals do their work. For the most part, it's an action-adventure platformer in which the player controls Batman, and follows him to the end of each stage, where a villain is set to appear. Some of the more common features in the game is the possibility to equip with different gadgets, such as bombs and x-ray lenses. The gadgets are in some cases essential to complete some stages. The player can return to the Batcave in order to re-equip the gadgets and restart a stage with all the lives accumulated up to that point (in case the player had lost lives). Have fun playing The Adventures of Batman & Robin online! More info: Wikipedia