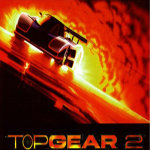 Top Gear 2 - For the sequel, like the original, Gremlin used rehashed graphics and gameplay from the Lotus racing trilogy. However, this game becomes more realistic, with a damage diagram on the left side of the screen, slower cars, and the possibility to upgrade your machine. The cars become more difficult to handle and the opponents are faster and tougher than in the previous game. The new addition of weather also plays a role, forcing the player to change from dry to wet tires. The game takes place in 16 countries including 64 cities, starting with Australasia (Australia and New Zealand). After each country is beaten, the player is given a password, which can be later used to pick the game back up from that position. Because of agreement to naming rights, the Giza Necropolis in Egypt was renamed to Hugh Sitton, a photographer of Corbis Corporation. The actual gameplay is quite simple. Players need to finish in the top ten positions in each race to qualify for the next one. There is a map that shows the course layout, the position of the players, and the position of the car in first place. The player is given 6 "nitro boosts" at the start which dramatically increase the car's speed for a short period of time. On certain courses, there are pickups along the road ranging from a "$" which is $1,000 cash, a "N" which is an extra "nitro boost", and a "S" which is an automatic nitro administered right when picked up and returns each lap. The other pickups can only be collected once per race. Players must take care to avoid too much damage to any area of the armor. If a section of armor is destroyed and the player takes damage in the area that the destroyed section of the armor used to protect, the car will spin out. Racers will be disqualified if they run out of fuel and coast to a stop before finishing the race. Since there are no pits for cars to refuel in unlike the first game, upgrading the transmission becomes mandatory in order to get the fuel economy needed to survive the longer races in the later portions of the game. Since the Genesis port of this game does not implement a fuel gauge, fuel economy is not a problem in that port. Players have the option of either an automatic or manual gearshift, and can configure the controls as they please at the opening menu of the game. Players can spend money earned in a race to upgrade their cars. Upgrading the engine makes the car accelerate faster, helps the top speed of the car by a small amount, and makes it easier for the car to reach higher gears. Upgrading the nitro makes nitro boosts accelerate more strongly and reach higher top speeds. Upgrading the transmission greatly improves the car's top speed and fuel economy, but this requires an engine that is strong enough to allow shifting into higher gears in order to be effective. Upgrading the armor allows cars to take more damage before the armor is destroyed in the area that is being upgraded. The paint shop allows the color of the car to be changed. Upgrading the tires improves their grip and the car's turning performance. Play Top Gear 2 online. Sneslive is the best place to play Super Nintendo games online. Enjoy our SNES games flash emulator and have fun! More info: Wikipedia